“Just Who Are These People?” – Chapo, Cuco and the Cartels 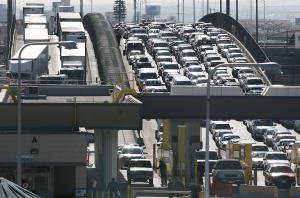 There is a line in the movie, “No Country for Old Men.” where the tough, craggy face West Texas sheriff  sizes up the body count and  brutality caused by drug dealers and says, “just who are these people?”

Twenty years ago, the same thought went through my mind when three bound and tortured bodies – the former Chihuahua State Police Commander  Refugio “Cuco” Ruvalcaba Muñoz  and his two adult sons who were 20 and 21 years – were found inside the trunk of a Honda.

It was parked smack in the middle of the International Bridge that links Juarez and El Paso – in broad daylight under a hot sun.

Thousands of vehicles drive on the bridge every day.

These murders in 1994 happened long before the cartels would bribe, butcher and blast their way into Juarez, turning it into the world’s most dangerous city. Where thousands would die on the streets, many of the bodies’ heads and other body parts strewn throughout the city.

It also started a mass exodus of Juarez residents from the city. Businesses closed down, the tourists stayed away and downtown Juarez looked like a ghost town.

When the three bodies were found on the bridge, Chapo Guzman, the billionaire leader of the Sinaloa Cartel, was still in a Mexican prison. He would escape from there in 2001, and 13 years later, the Mexican Marines and police with the help of the U.S. federal agents would finally track him down in Mazatlan and arrest him.

Cuco Had Many Friends in the U.S Side of the Border

In the U.S., Mexican State Commander Refugio Ruvalcaba or as he was known as “Cuco” was highly thought of for the apprehension in Mexico of a number of high-profile suspects wanted in connection with the murders of U.S. law-enforcement officers, including Cuban Jose Echavarria who killed an FBI agent during a bank robbery in Las Vegas.

Cuco even went to Las Vegas to testify at Echavarria’s trial.  After being named state commander in 1986, Cuco fired 100 corrupt police officers, according to published reports. He got a lot of good ink for that move by newspapers on both sides of the border.

In 1979, Cuco became a hero when he “rescued” the American flag from Mexican demonstrators who had ripped the flag off the pole  at the Santa Fe Bridge. The flag was returned to the U.S. Consulate in Juarez.

The Herald Post wrote after Cuco’s death that “El Paso leaders had a high opinion of the affable, soft spoken comandante” after he literally wrestled the flag away from protesters.

Cuco and The Juarez Beat

I met Cuco when I was assigned to  go to Juarez and write a story about the Rio Grande strangler who had killed several Mexican women. The bodies were found along the river. That day, the news broke that Mexican police had arrested a suspect.

Cuco held an impromptu press conference about the arrest. But first, he had to open the locked metal drawer to get to the file about the case and arrest.  His young secretary had lost or misplaced the keys to the drawer.  Frustrated, he was upset, muttering curse words and raising his voice. His men tried to get inside the drawer using a thin steel bar.

Finally, a locksmith had to be called to his office. The drawer was opened and the press conference held.

I was rarely assigned to do stories in Juarez back then.

During that time, however,  the unwritten rule among Mexican drug dealers was that women, children,  journalists and for the most part, other noncombatants were taboo.

That would later change when cartels among them the Zetas went to war and lifted a page from the Taliban playbook. The torture, killing and carving up of people in the drug trade began. Those who happened to be at the wrong place at the wrong time or  were in the way were also killed, including women and children.

In Mexico, Cuco Made a lot of Enemies

In the newsroom, my good friend and reporter Julian Resendez covered WaZoo as Herald Post reporters liked to call the Juarez beat. He did so for nearly a decade and knew about another side of Cuco that was hidden from the public.

Cuco was highly controversial in Mexico for expediting the return of suspects wanted in the U.S., and for human-rights violations associated with the men under his command, Julian said.

One of his deputy commanders was  later linked to auto-theft rings in El Paso, Julian said.

“Cuco was a very colorful character. He talked like a gentleman but somehow kept a tight rein on some very, very rough people. I had a couple of run-ins with him,” Julian said.

Adding, “Once he chewed me out for us (Herald Post) linking his cops to auto-theft rings in El Paso, but then promptly had two cops with a Slim Jim help me open my car door in his parking lot because I had left my keys locked in.”

The Rabbit Joke That Cuco and His Boys Loved to Tell

One day, Julian told reporters about the joke that Cuco and his boys told him about a rabbit, making light of the  human rights abuse allegations against them.

The joke went like this:  The FBI, Interpol and Cuco’s cops held a contest to see who could first find a rabbit set free in the middle of Downtown Juarez.

The FBI first went out and eight hours later found the rabbit. Next it was Interpol’s turn. It took them six hours.  But Cuco’s men came back  only four hours later.

They returned with an elephant on crutches with a black eye and a broken tusk. The elephant wanted to confess that he was the rabbit that they were looking for.

“He never thought I would dare publish the anecdote,” said Julian.

Julian said he went into private investigations after leaving the Chihuahua police and speculation at the time was that he may have been conducting surveillance on cartel members.

“I left El Paso before the murders were solved, if they were solved at all,” Julian said.

The “Lord of the Skies” Dies During Plastic Surgery

The fighting between Sinaloa and Juarez cartels wasn’t much of an issue when Julian covered in the 1990s, he said.

The Juarez Cartel had a strong structure and leader in Amado Carrillo Fuentes who was known as the “Lord of the Skies” because of the fleet of aircraft he owned and used to smuggle drugs.

One day, the Lord of the Skies made the front page of the newspaper.

I got a call from a source in the U.S. Attorney’s Office in El Paso who said I had to show up at a hearing in federal court. He wouldn’t say why. When I pressed him on whether it was a BS  story that could wait the next day because I was very busy, he said: “You’ve got to get down here.”

I ended up writing a front-page story in the El Paso Times. I went to work at that newspaper for about three years before returning to the Herald-Post, leaving the Post in 1997.

The DEA agent who testified at the criminal hearing, involving two of Fuentes’ drug smugglers, said they had information from CIs that Carrillo’s aircraft loaded with cocaine were being guarded at the Juarez airport by the Mexican Army.

The DEA agent testified that their sources said that tons of cocaine were housed in several warehouses throughout Juarez.

Until then, reporters were never able to nail down this piece of information (on the record) from federal officials about the Juarez’s military and police involvement with Carrillo’s drug organization.

The Violence When Carrillo Was the Boss was Low Key

Rarely, did cartels’ violence spill into El Paso, although the number of kidnappings of people who were taken to Mexico always remained steady, according to the FBI.

It would have been a very bad business move for the cartels to take their running gun battles and beheadings to El Paso .

No doubt, the border would have been quickly sealed and troops from Fort Bliss, which is about 10 minutes from downtown Juarez, would more than likely be put along the steel and concrete fence that now separates the two cities.

The cartels would have been lucky to sneak a kiestered, nickel-bag of marijuana across the Rio Grande.

Julian said there was a fair amount of “independent” traffickers and a few incursions by the Tijuana Cartel into Juarez, then headed by the Arellano Felix brothers when Carrillo was the boss.

The violence,  Julian said, only started getting out of hand after Carrillo’s death in 1997 during plastic surgery.

“There was a long, protracted struggle for control of the organization, other more violent groups such as the Zetas came along and, above all, it seems no one was keeping the ‘bad guys’ in check inside the Mexican underworld anymore,” said Julian.

Chapo got back into the game after his escape in 2001 and became “really, really big” with the collapse of the Gulf Cartel a couple of years later, said Julian.

I don’t think the violence can be attributed to any one group, as much as to the struggle for control of drug routes into the United States and each group’s inability to keep tabs on its operatives, said Julian.

Chapo’s Arrest and the Aftermath

There are new indications that Juarez is showing signs of vitality again: violence is down 25 percent, thousands of residents are returning to the city and new businesses are springing up, according to a recent article in the New York Times.

Experts say there could be turf wars among the various Mexican drug cartels to test the weakness of Chapo’s Sinaloa drug cartel, and there could also be intra-fighting among the Sinaloa’s underling bosses for power.

There could be a spike in the violence and bloodshed as a result, said Julian.

Also some unemployed drug traffickers and assassins who find themselves out of work will start plying new trades – kidnappings, robberies etc,  said  Julian.

But the Sinaloa Cartel that Chapo created is  fine-tuned like IBM or AT&T and will be hard to dismantle.

“The Sinaloa Cartel is a long-running, highly organized criminal organization. It has a structure comparable to a business corporation that can probably survive the demise of its CEO,” Julian said. “The question is, will rival drug organizations think the Sinaloa Cartel is weakened and try to take over some of its territory? If that happens we probably will see a spike in violence in Mexico. Is that likely to happen? I don’t know.”

Just Saying: Putin is an Amplified Version of Trump