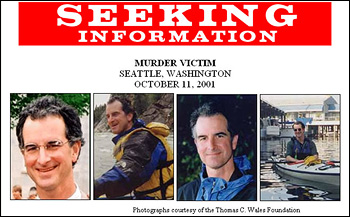 Deputy Attorney General Lisa O. Monaco on Monday announced that the Department of Justice has doubled the $1 million reward for information leading to the arrest and conviction of those responsible for the October 2001 murder of Seattle Assistant U.S. Attorney Thomas Wales.

With the inclusion of reward funds raised by the National Association of Former U.S. Attorneys, the total reward now stands at approximately $2.5 million.

Wales worked as a federal prosecutor in the Western District of Washington for 18 years before he was shot and killed in his home the evening of Oct. 11, 2001.

According to the Seattle Times,  agents have searched his homes repeatedly, had him pulled from the cockpit, dragged friends and family before a grand jury, run an undercover sting operation, and offered a $1.5 million reward.

They’ve spent years tracking the buyers of custom gun barrels connected to the crime scene, and pressured and even indicted people they believe were bit players in the plot in hopes of breaking the case, but to no avail, the Seattle Times stated.

Now, they think they’re close — or at least closer — and the details read like a Hollywood screenplay: revenge, alibis, international drug cartels, smuggling, theft and, ultimately, murder, according to the Times.

“The Department of Justice will never forget Tom’s contributions to the department and the cause of justice, nor will we forget the tragedy of his death,” said Deputy Attorney General Monaco. “Although two decades have passed, the Department of Justice remains committed to this investigation. Somebody knows something about this murder, and we want to do everything we can to encourage them to come forward now.”

In addition to doubling the reward, the department announced steps to redouble its efforts to pursue justice in the investigation.

The U.S. Attorney’s Office for the Western District of Washington will be joining the Seattle Prosecutor Murder (SEPROM) Task Force.

The department will augment the prosecution effort with additional Seattle-based resources, including personnel with expertise in homicide investigations.

“The addition of these resources, including attorneys and investigators from the U.S. Attorney’s Office for the Western District of Washington and FBI, will put the department in the strongest possible position to solve Tom’s murder,” said Deputy Attorney General Monaco.

The SEPROM Task Force is now a joint effort by the FBI, the Seattle Police Department, the Department of Justice, the U.S. Attorney’s Office for the Western District of Washington and the King County Prosecuting Attorney’s Office. The task force is also leveraging emerging and evolving technologies in the effort.

Anyone with information is encouraged to contact the FBI and can do so confidentially by phone at (206) 622-0460 or by e-mail at walestips@fbi.gov.

Tips can also be sent to the FBI at 1110 Third Avenue, Seattle, WA, 98101. The complete library of information, including multi-media materials for download and use, the FBI Seeking Information poster, details about the tip lines and more can be found at https://www.fbi.gov/wanted/seeking-info/thomas-crane-wales.