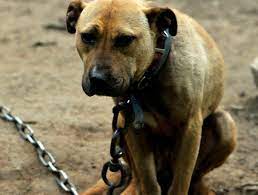 A well-known dog-fighting trainer and breeder admitted to an animal fighting charge as the result of an ongoing investigation into a multi-state dogfighting and drug trafficking ring.

Vernon Vegas, 49, of Suwanee, Georgia, plead guilty to conspiracy to participate in an animal fighting venture on Sept. 14.

According to court documents, law enforcement investigated a criminal organization involved in both cocaine distribution and organized dogfighting tbased out of Roberta, Georgia, which extended into North Georgia, Florida, and Alabama from May 2019 until February 2020.

In February 2020, law enforcement executed 15 residential search warrants and seized more than 150 dogs that were being used for organized dogfighting.

“This case illustrates the connection between the underworld of drugs, organized crime and dog-fighting,” said Assistant Attorney General Todd Kim of the Justice Department’s Environment and Natural Resources Division. “Vernon Vegas profited from these dogs’ pain and will rightly be held to account.”

“Vernon Vegas was the trainer to the trainers — he taught individuals about the bloody and brutal business of dog-fighting and worked to ensure it was thriving,” said Acting U.S. Attorney Peter D. Leary for the Middle District of Georgia. “Dogfighting ventures are magnets for a multitude of dangerous criminal activity.”

Between October 1996 and February 2020, Vegas, the owner of Cane Valley Kennels, bred, trained, sold, and transported dogs for the purpose of dogfighting.

As part of his business, Vegas designed and offered a seven-week “keep” where he trained dogs for animal fighting ventures, prepared online pedigrees for the fighting dogs bred, and trained at Cane Valley Kennels.

He also provided advice to his co-conspirators on how to train dogs for purposes of engaging in animal fighting ventures and kept a multitude of training and conditioning equipment including slat mills, chains, a staple gun, hanging weight scales, break sticks, flirt poles, and various medicines to treat injuries or disease sustained by dogs made to fight.

Between January 2017, and February 2020, Vegas attended dog fights with co-conspirators Derrick Owens and Christopher Raines at locations in the Middle District of Georgia and advised Owens on various matters related to preparing dogs for animal fighting.

Vegas is facing up to five years in prison and up to $250,000 fine. His sentencing is scheduled for Dec. 7.