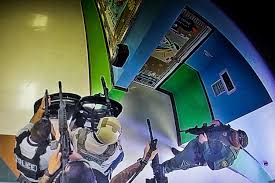 “The attacker actually did shoot his grandmother in her face. Despite not having a driver’s license, he then proceeded to steal her truck, abandoning her to seek help from a neighbor as he set out to complete his plan,” the 77-page report states.

Driving toward Robb Elementary on South Grove Street, the attacker apparently lost control of the truck while approaching Geraldine Street, crashing the vehicle into a ditch, the report stated.

Surveillance cameras at the nearby Hillcrest Memorial Funeral Home captured the crash on video at approximately 11:28 a.m.

Two men saw the crash and began to walk from the funeral home, across Geraldine Street, to the location of the truck.

The attacker emerged from the wreckage and began shooting toward the two men, who turned and fled back toward the funeral home. Immediately, a report was made to 911 about a man at that location shooting a gun.

The report stated that surveillance cameras at the nearby Hillcrest Memorial Funeral Home captured the crash on video at approximately 11:28 a.m.

Two men saw the crash and began to walk from the funeral home, across Geraldine Street, to the location of the truck.

The attacker emerged from the wreckage and began shooting toward the two men, who turned and fled back toward the funeral home.

Immediately, a report was made to 911 about a man at that location shooting a gun.

The report stated that the attacker was standing in front of a closet in the corner of Room 111 and fired his rifle at the stack of officers coming through the classroom door.

The officers fired on the attacker, killing him.

“Because of these failures of facilities maintenance and advance preparation, the attacker fired most of his shots and likely murdered most of his innocent victims before any responder set foot in the building,” the report concluded. “Of the approximately 142 rounds the attacker fired inside the building, it is almost certain that he rapidly fired over 100 of those rounds before any officer entered.”

Chief Arredondo and other officers contended they were justified in treating the attacker as a “barricaded subject” rather than an “active shooter” because of lack of visual confirmation of injuries or other information.

Chief Arredondo explained his reasoning for not continuing an active shooter-style response, telling the Committee: [W]hen there’s a threat … you have to visibly be able to see the threat. You have to have a target before you engage your firearm. That was just something that’s gone through my head a million times … .[G]etting fired at through the wall … coming from a blind wall, I had no idea what was on the other side of that wall. But … you eliminate the threat when you could see it. … I never saw a threat. I never got to … physically see the threat or the shooter…”

A major error in the law enforcement response at Robb Elementary School was the failure of any officers to assume and exercise effective incident command.

The report stated that hundreds of responders from numerous law enforcement agencies—many of whom were better trained and better equipped than the school district police—quickly arrived on the scene.

The report noted: Uvalde Police officers responding to a vehicle wreck and shots fired appear to have arrived first on the scene, which would make one of them the initial incident commander.

This made him a natural person to assume command over an incident as it developed. But Chief Arredondo does not consider himself to have assumed incident command.

He explained to the Committee: [W]hile you’re in there, you don’t title yourself … .I know our policy states you’re the incident commander. My approach and thought was responding as a police officer. And so I didn’t title myself. But once I got in there and we took that fire, back then, I realized, we need some things. We’ve got to get in that door. We need an extraction tool. We need those keys. As far as … I’m talking about the command part … the people that went in, there was a big group of them outside that door. I have no idea who they were and how they walked in or anything. I kind of – I wasn’t given that direction. *** you can always hope and pray that there’s an incident command post outside. I just didn’t have access to that. I didn’t know anything about that.”

A command post could have transformed chaos into order, including the deliberate assignment of tasks and the flow of the information necessary to inform critical decision making, the report stated.

Uvalde CISD and its police department failed to implement their active shooter plan and failed to exercise command and control of law enforcement responding to the tragedy. But these local officials were not the only ones expected to supply the leadership needed during this tragedy.

Those other responders, who also had received training on active shooter response and the interrelation of law enforcement agencies, could have helped to address the unfolding chaos. Yet in this crisis, no responder seized the initiative to establish an incident command post, according to the report.

One motive that drove the man behind the massacre at Robb Elementary School was a desire for notoriety and fame. The Committee refuses to perpetuate his memory in that way; our focus is to ensure that Texas never forgets the children and beloved teachers who have been lost and the lessons this tragedy can teach. So, instead of naming him, we call him by a generic term used in active shooter training: “the attacker,” the report stated.